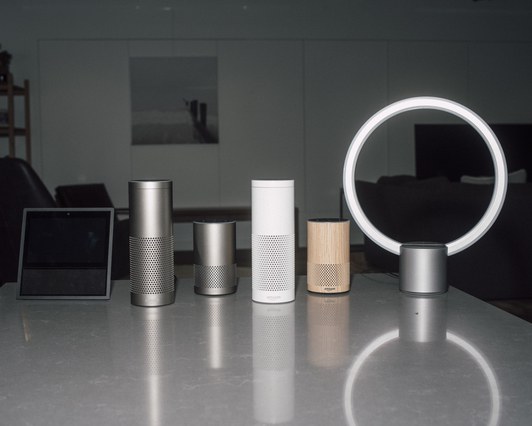 WHEN IT FIRST launched in 2014, Amazon’s Alexa voice assistant was little more than an experiment. It appeared first inside the Echo, itself a wacky gadget launched without warning or much expectation. As it took off, though, and millions of people began to put a smart speaker in their home, Amazon’s ambition exploded. The company saw an opportunity to build a new voice-first computing platform that worked everywhere, all the time, no matter what you were doing. And it began to chase that vision at full speed.

While one team at Amazon works on the Echo products themselves—including the Echo Spot, Show, Dot, Plus, and probably a bunch more since you started reading this sentence—and another works on the Alexa service itself, a different team is working on engineering Alexa’s world takeover. While Apple and Google offer access to their assistants slowly and methodically, Amazon has flung the doors off their hinges and let anyone in. The company knows the path to success is not just in Echo devices, and that Amazon can’t possibly make every gadget anyone wants to use. So they’ve created a new division called Alexa Voice Services, which builds hardware and software with the aim of making it stupendously easy to add Alexa into whatever ceiling fan, lightbulb, refrigerator, or car someone might be working on. “You should be able to talk to Alexa no matter where you’re located or what device you’re talking to,” says Priya Abani, Amazon’s director of AVS enablement. “We basically envision a world where Alexa is everywhere.”

via CES 2018: Inside the Lab Where Amazon’s Alexa Takes Over The World | WIRED